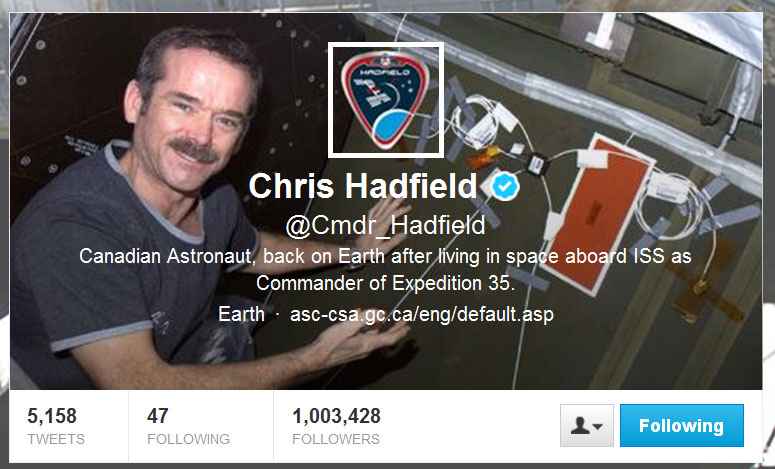 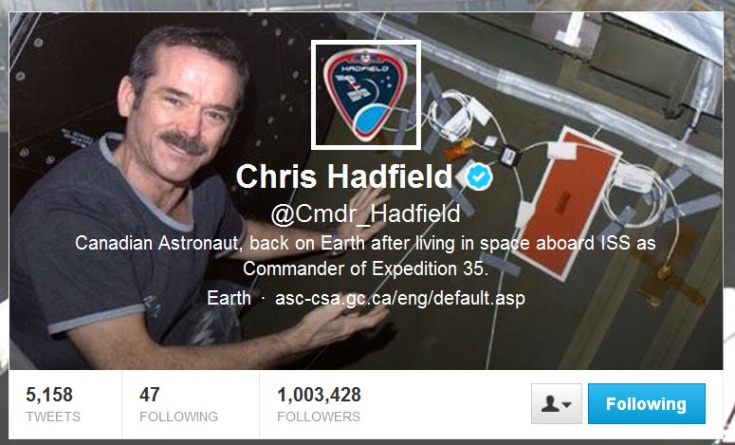 While in space he gained millions of fans through his prolific social media posts. He was the first person to use Twitter in space. I started following him on Twitter a few months ago after hearing about his interesting tweets. Through his Twitter account he shared amazing photos of Earth from space, as well as videos of life in space. I think it’s fair to say that most of us will never travel to space so seeing these photos/videos and reading his tweets was a way for us to get a glimpse into an astronaut’s life in space. And he continues to tweet about adjusting to life back on Earth.

Cmdr Hadfield embraced social media during his time in space. He understands the power of social media. As I was reading his tweets, the thought crossed my mind that the agriculture industry could learn a lesson from Cmdr Hadfield. (Trust me to find a way to link this blog post to agriculture!)

Cmdr Hadfield was one person and he reached millions of people through social media. What if many more farmers, ranchers, ag associations, ag companies and members of the ag industry embraced social media and shared their stories/photos/videos? Think of how many people could be reached. Cmdr Hadfield is a great example that we in the agriculture industry can learn from.

I encourage you to fully engage in social media, share your positive stories and be transparent – just like Cmdr Hadfield. From outer space to agriculture here on Earth.

When you realize that kids of your own aren’t in the cards, you’re even more thankful to be an aunt. Love these two 💕 This summer they visited aunty’s new digs in Saskatchewan and I got to spend a few days with them at the farm in Manitoba. Once again we celebrated grandma’s (my mom’s) birthday on nearby Star Mound hill. #BeckettAndEberly #summervacation
Time to break my Instagram silence and share my big news. I’m now a resident of Saskatchewan! Made the move from Calgary to Regina last month. 7 years ago I moved from Winnipeg to Calgary in January. I know how to time my moves! Ha Moving in the dead of winter is risky. I’m very thankful for the good winter weather and road conditions we had. This move reminded me that moving to another province is a lot of work. I really appreciate everyone who helped me along the way - realtors, mortgage specialists, insurance brokers, utility company representatives, colleagues, friends and family. January was a bit hectic. Among three work trips to Saskatoon, Brandon and Edmonton for Ag tradeshows and three customer events I planned, I packed up my life and moved to another province. How did I get through it? To do lists, my mom, a new attitude and yes some alcohol. I’ve adopted a new, relaxed “it is what it is” attitude. I used to spend a lot of time worrying about things I can’t control. I’m looking forward to many exciting adventures in Sask! If you’re ever in town or driving through let me know. #onthemove #Sask #Prairiegirl
Summer vacation in Manitoba. Been about 7 years since I had seen my California friend Monica. And a day trip into Winnipeg to see my friends Candace and Britta. Always great to catch up with friends!
The past two months reminded me how much I love working in agriculture. June and July were very busy with meetings, events and tours including a Proven Seed team meeting in BC, Farm Progress Show in Regina, CanolaPalooza events in both Saskatoon and Lacombe, five innovation tours for our staff across the Prairies, a Manitoba customer tour, two Nutrien Learning Days where we educate our city colleagues from Saskatoon and Calgary about modern Ag, and Ag in Motion at Langham, SK which included our ON Point event where we hosted app 600 customers and staff in Saskatoon. Among all this we officially rebranded on July 1 - Crop Production Services is now Nutrien Ag Solutions. Throw in volunteering with my new committee during the Calgary Stampede and trying to sell my condo. But I thrive on being busy. My work and volunteering give me purpose. Do what you love.