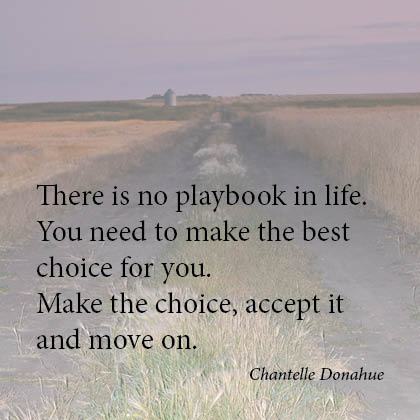 As I sit here watching the 2016 IIHF World Championship gold medal women’s hockey game between Canada and the USA on TV, I think of play books. It’s probably safe to assume that both teams have an extensive playbook filled with various plays and drills – all with the goal of improving their game and ultimately winning.

If only there was a playbook for life. Detailed plays that one could follow that would lead to happiness and success – both personally and professionally.

But as we all know, life doesn’t come with a playbook.

Speaker Chantelle Donahue captured this perfectly at the recent Advancing Women in Agriculture conference in Calgary. Once again, there were many powerful speakers at the conference who shared their inspirational stories with the over 500 ag women in attendance. But Chantelle’s talk stood out for me. I felt I could relate to what she was saying. Chantelle grew up on a farm in Saskatchewan and desperately wanted to get off the farm when she was older. Little did she know at the time that she’d eventually marry a farmer and return to the farm.

I’ve always been indecisive. I’m the girl on the fence trying to decide which side is greener. But you can only sit on that fence for so long. Eventually a decision must be made. And sometimes you make the right decision, and sometimes you don’t. Regardless, accept it and move on – as Chantelle says.

Life is a journey. Sometimes you need to take the long winding road to reach your destination, even if there may be a straight path. I certainly haven’t taken the straight path in life – and that’s OK. Eventually I’ll get where I’m going – and it may not be where I thought I wanted to go,  but it’ll be where I’m meant to be.